This week’s swatch is a polish that’s been out for quite a while, but is new to me. I’m not a huge fan of the double-ended bottles Revlon has been putting out because I feel like you get so little polish, and I feel like a lot of the nail art ideas they pitch them with (like the chalkboard nails sets) are things you could do easily on your own with polish you already have. :/

My love of flakie glitters (and Target’s price of $6) convinced me to try the Galactic set out. Though I’m still not won over on the double bottles in general, once I tried this one I decided that I liked the Moon Candy sets enough to go back and pick up two more of them (in part because it’s hard to find good coloured flakies in Canada). Check out more pics of this double set under the cut! 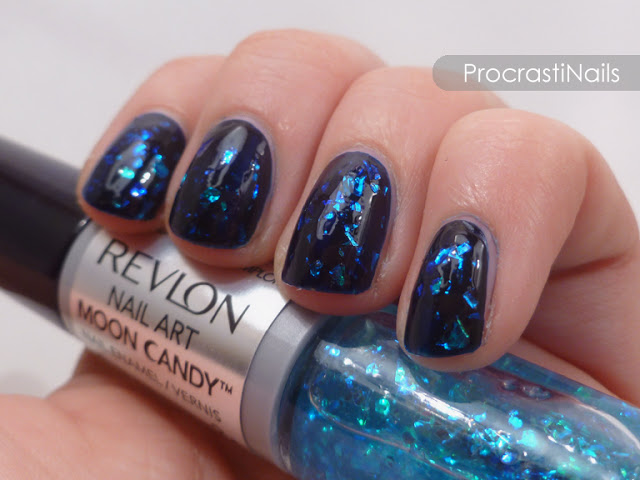 The Revlon Nail Art Moon Candy sets come in ten different combos, and all of them have a creme base colour on one end and a coloured flakie topcoat on the other end. The bottles are about the size of a large pen, and contain just under 4 mL on each end. The colour combos all compliment each other (brown polish and gold flakies, red polish and orange flakies, etc.) and are meant to be used together to look like… space rocks? I think? Haha. You can see all the colour combos they have available on their site.

This one is called Galactic, and it kind of makes me think about floating around in space with stars reflecting light in the distance. It’s definitely more of a calm, dark and thoughtful inspiring combo, rather than a BOOM POW AWAKE YOU’RE IN SPACE AND THINGS ARE EXPLODING combo. You get me? 🙂 Hahah. 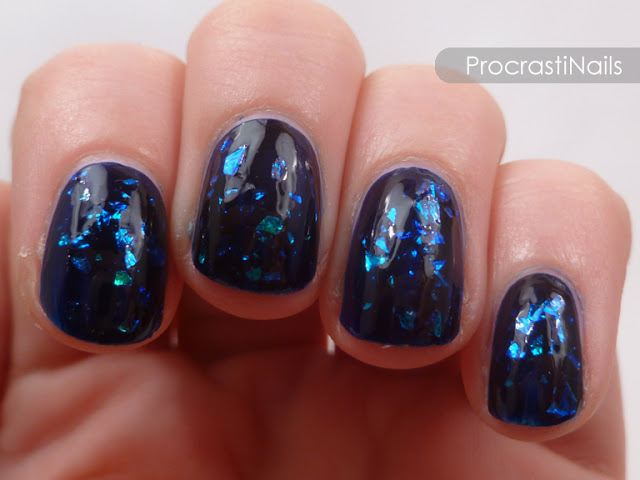 I thought about swatching the base colour on it’s own, but it’s a pretty
standard dark navy blue. The flakie coat is an iridescent light blue that shines shades of green and turquoise in the right light. Pictured here is once coat of the flakies over a single coat of the base, with a thick coat of Seche Vite topcoat to smooth everything down.

The base went on perfectly with one coat, but as you can
see it stained my cuticles which made tidying it up difficult. I’m so
embarrassed of my cuticles in this pic… This was in my rough patch
when I wasn’t moisturizing them as much as I should. 🙁 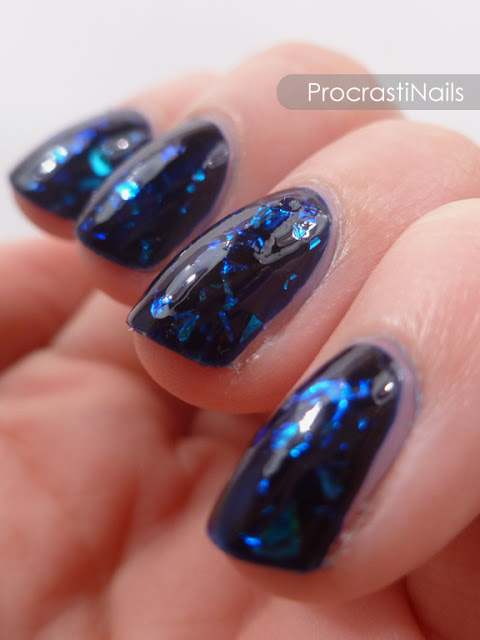 Overall I’m fairly happy with this purchase (obviously, if I went out and bought two more after!) though in the future I’m going to be careful with application so I don’t have to worry about blue cuticles. Removal was pretty easy with this polish, though I did use the technique where you let saturated pieces of cotton balls sit on your nails for a few minutes rather than a standard wipe. I used a clear base coat with this colour and there was no staining of my nails after removal. 🙂

Did you pick up any of the Moon Candy sets when they came out? Thinking about it now (haha)? Let me know!

ProcrastiNails: Nail School // Why I’m doing a nail tech program and why I’m doing it online