This week’s Swatch-It Sunday post is being replaced with a juiced-up swatch post: my October 2013 Julep Maven It Girl Box! Woohoo! 🙂 I’ve had these swatched and sitting in my folder for about a week and a half, but better late than never, right?

I wasn’t super excited about this box, and actually went back-and-forth for a while between this and the Bombshell box. I didn’t particularly like the beauty item this month (Kajal eyeliner + sharpener) so I decided to stick with the It Girl Box in the end. The only add-on I decided on was Beatrix (the black and gold glitter), and that and Ciara (the purple with teal flakes) were the only colours I actually wanted at all. Thankfully the other colours pleasantly surprised me once I got them in my hands. 🙂 So let’s get to the box!

I usually put the quote from my Julep boxes up at work, and while I get the context of the quote to go with the theme (this month it was The Rebel Set), “don’t ask permission” doesn’t sit well for me in the majority of situations I deal with at work. So this month it stayed in the box. The extra gift was candy corn which is not my cup of tea (Mmmm, tea. Julep should send us tea!), so I put it aside to give to my mom.

On to the polish! 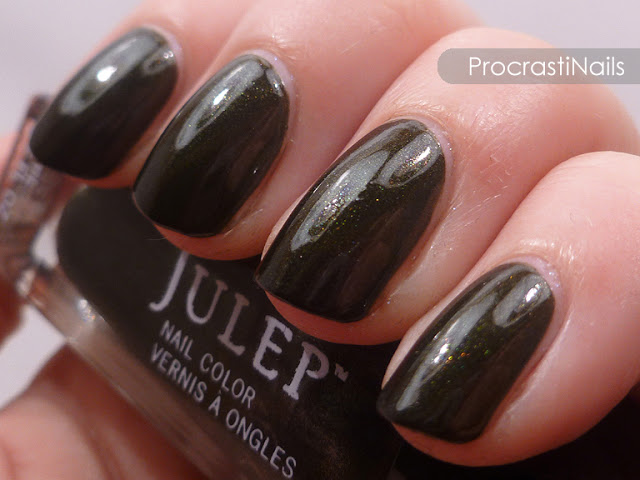 Kendra is described as an “army green frost” and the finish is supposed to be a sheer/frost/pearl. Though I would say this is not a sheer in any meaning of the word that I’m aware of. (Unless to Julep it somehow means something other than thin/see-through? Because as you can see, this polish is solid as hell. lol.)

This is a nice dark creme with microglitter and a bit of that frosty/pearl finish in the bottle (though not on the nails). At first glance in the bottle it looks almost black, but the dark earthy green shade comes through nicely once it’s on the nail. And as you can see, the flecks of glitter/shimmer show up in the light. Pretty! What you see pictured here is three coats, though it would be fine with two. No topcoat.

Honestly, Kendra was the polish I was least looking forward to in this box. When I first saw the colours for the It Girl Box I thought “ugghhh another dark green, I have so many already!” but when I saw it in person it was a lot darker than it looked on the site. Less “walking deep through the forest on a sunny day” and more “walking through the deep dark forest at midnight with no stars out.” I still don’t think I’ll use it very much, but it goes to show that what you see in swatches or online isn’t always what you’re going to see in real life. 🙂 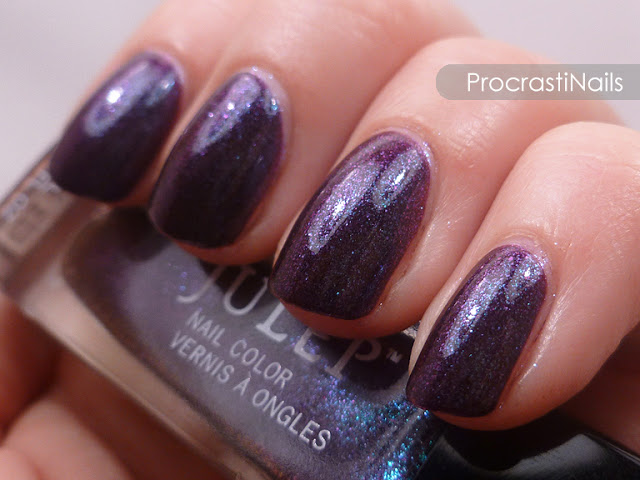 Ciara is described as a “vampy magenta with teal microglitter” with a shimmer finish, and this one was pretty much what I expected from the swatches on the site (which is a good thing). That being said, this is not magenta. Purple. It’s purple, Julep. lol. I love love love the teal flakes that come through the base colour, and I’d have to say this is one of the more unique polishes I’ve gotten from Julep so far. 🙂

This one was a bit sheer and took a full three coats (no topcoat) to build up to this coverage, but it was well worth it. Look at that shimmer! Ahh! Unfortunately the teal didn’t come through on my nails as much in these shots, but you can see it in the light of the bottle.

Missy is described as a “titanium metallic” on the site, and it went on beautifully with three coats (though it would have been fine with two or even one in a rush). Again no topcoat. The only down side to this much sparkle and shine is that it’s one of those polishes that leaves specs of glitter everywhere during cuticle clean-up and polish removal.

Ohhhh Missy. I was so worried that this polish was going to be a copy of Amity from the Julep Champagne Trio, but thankfully my worries were misplaced. Where Amity leans towards being a more sheer buttery white gold with a frosty pearl finish, Missy is her rebellious, sparkly and cool silver foil sister. Dupe avoided! And in fact, this is now one of my favourite polishes from Julep. Want to know why? Check it out below! 😉 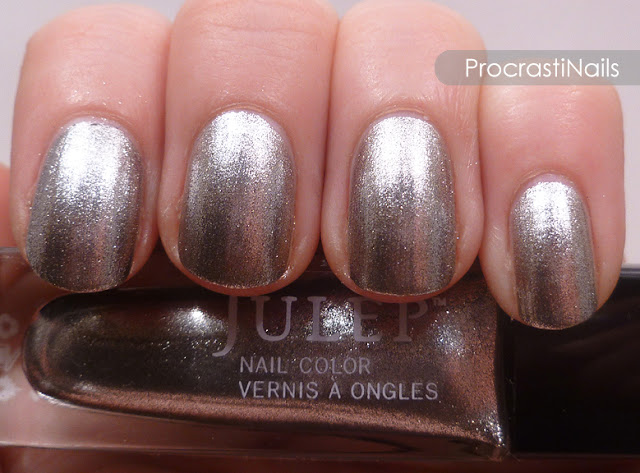 And this is the reason it is one of my favs from Julep so far. IT STAMPS AMAZINGLY. Do you know how long I’ve been looking for a good silver stamping polish?! Ahhhh! I used it to make a subtle mani for my cousin’s wedding after I got it (pictured below on top of Julep Florence) and was very pleased with this discovery. 🙂 (Sorry for the bumps and tip wear in the pic, this was taken a couple days after the fact.)

Beatrix is described as a “coal black and multidimensional glitter” and it was the only add-on I got this month. It’s a combination of small and medium matte black hex glitters, small gold holo hex glitters and large gold hex glitters. Coverage was awesome, as what you see above is a single sweep of the brush on each nail (no topcoat). For swatching purposes I put it on top of Julep Florence because it’s my favourite nude. (I feel swatching glitters over nude polish makes sure the base colour doesn’t steal all the attention.)

I honestly feel this polish could go on top of any colour to add a bit of pizzaz. It would also be awesome in a glitter sandwich, which I’m going to have to remind myself to try! 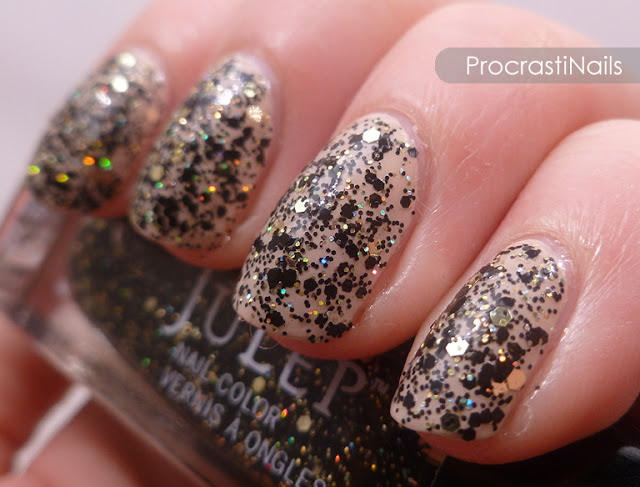 On the site this polish was swatched as a full-coverage glitter, so when I was swatching it I wanted to see what it would look like both as a glitter topper (as seen in the previous pictures with one coat) and as a main attraction. In these shots I layered 3 coats of Beatrix on top of Florence. As you can see three coats still doesn’t get you full coverage but it does give the polish a different look. I like both looks, but I think if I had to choose one I’d go with this more full coverage. 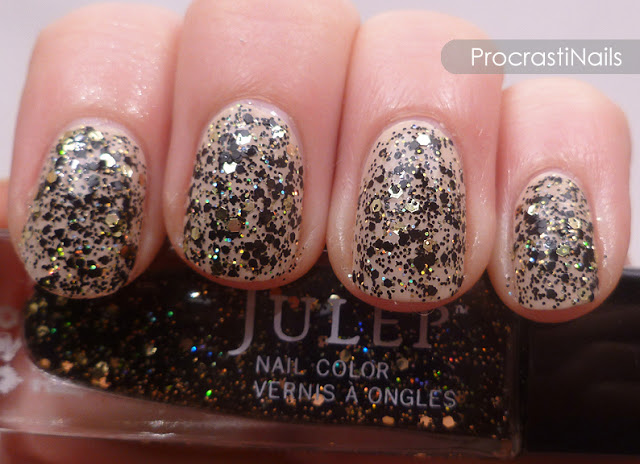 Phew! That was a lot of post. lol. Overall I’m happy with all of my polishes, though Beatrix and Ciara are the stars with Missy edging in a bit due to her stamping quality.

Julep polishes retail for $14 (US) each, or $11.20 each if you’re a Maven. The monthly box program is $19.99/month and you get either three polishes, two polishes and full size product, or two full sized products depending on which beauty profile you choose. If you’re interested in signing up for the Julep Maven program you’re welcome to use my referral link, and remember to use the code “FREEBOX” at the checkout to get your first month free! 🙂

So, thoughts about the box for this month? What do you think about Beatrix, one coat or three coats? Let me know!! 🙂

ProcrastiNails: The 12 Days of Christmas Nail Art: Dec 1st – Presents for Everyone! 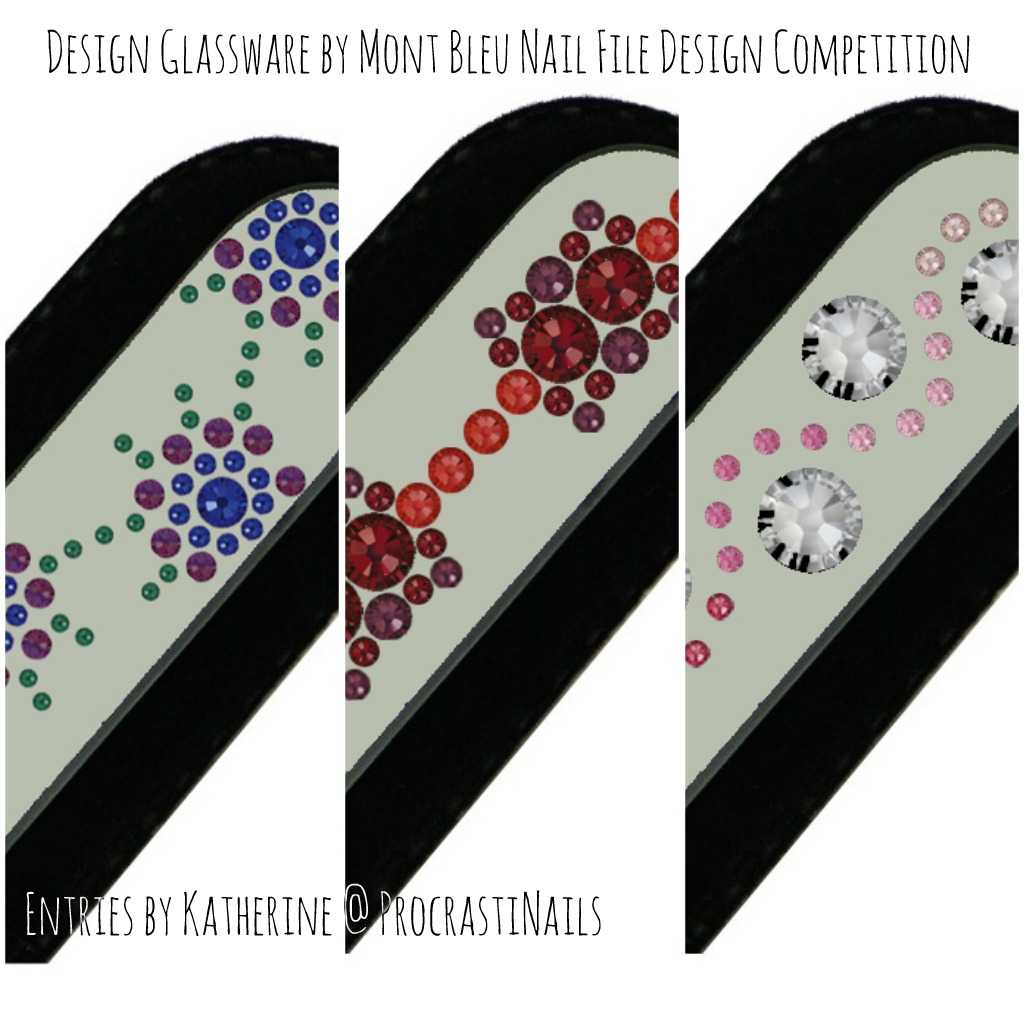