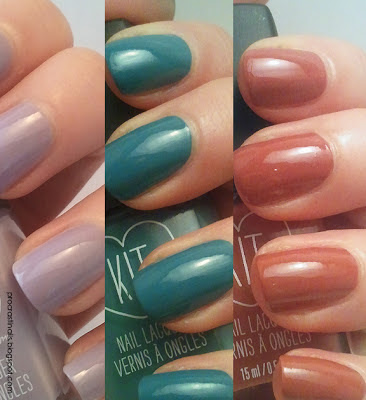 So Rexall PharmaPlus has started a nail polish line that I’ve been curious about called Kit, and when I was in the store today I decided to pick some up and give them a try. Overall, I’m pleased!

I choose these three because I have a pastel nail polish problem (though it’s not as serious as my pinkish-orange nail polish problem) and it seemed like these were all colours I didn’t have exact copies of already. From their website, the whole line apparently provides “UVA protection”, a “high shine finish” and “no toluene, DBO or formaldehyde.”

Too Cool For School

This is a creamy, dusky rose colour. It took two coats to get to full opacity. I seem to collect light pink shades in hopes that I’ll find one I like as much as OPI’s Sparrow Me the Drama, and while I did like this pink it didn’t quite compare. OH well. 🙂 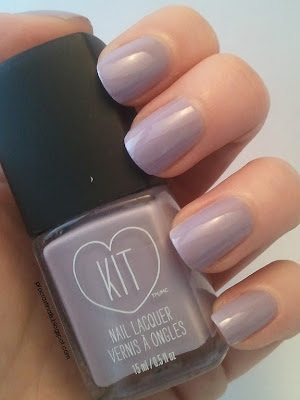 This is a cool, light violet. This one was a bit watery and didn’t go on as solidly as the other two colours… It took three coats to get this amount of coverage and get rid of any visible nail line, and I considered doing a fourth. That being said, I still like the colour and ended up wearing it for a few days after swatching!

In the bottle this looked like a subdued teal, but it was more vibrant than expected on my nails. I was a bit disappointed in that since this was the first colour that really grabbed me, and I was hoping for a lighter shade. However, this was almost completely opaque after one coat which was awesome. I did two for these pics anyway, but it isn’t really needed.

Update:
I just used Teal Tango for a Game of Thrones mani, and the pictures were taken in natural light rather than the artificial I used here so I thought I would add one to this post. Note that in real life the colour is closer to what appears in artificial light than the light blue that you see in this pic. 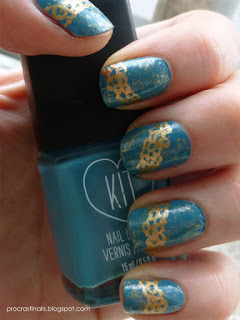 And here’s my overall thoughts on the brand, based on my experience with these three:

Pros:
– Decent selection of colours
– Applied well
– Love the branding/bottle
– No strong scent
– Good price (about $7 CAN, though I got them on sale for about $4 CAN)
– Nice level of gloss without a top coat

Cons:
– All three showed up a shade more vibrant on my nails than they were in the bottle which I didn’t like since I was hoping for softer colours when I bought them
– I really don’t like their naming (ex: Too Cool For School sounds like it should be exciting and bright, not a colour I would wear to a job interview)

Verdict:
Pretty good. As I said, they have a nice selection of colours considering they’re a drugstore brand that just started, and I would be open to picking up a few more the next time I’m out. I wore Moonlight for a few days after swatching, and it stayed on with a top coat fairly well (3 days until I saw much wear on the tips).