Chapters Indigo is carrying a new line of nail polishes called Coco & Lulu by Cake! They only have a handful of colours so far and they’re all pretty basic colours, but I picked up a couple last time I was there to try them out. And you know what? I was pleasantly surprised! I’ll totally be picking more of these up next time I’m at Chapters Indigo.

We collaborated with Canadian beauty brand Cake to bring you our new exclusive collection of 3-free nail lacquers in the season’s most-wanted hues. It’s specially formulated for a long-lasting, high gloss finish and free of bibutyl phthalate, toluene, and formaldehyde. 0.5ml/0.5 fl.oz.

The first colour I picked up was Riviera, which is a gorgeous teal blue creme. It went on smoothly and was fully opaque after two coats (though in a rush you could totally get away with one coat). I love how bold and bright this colour is. And look how shiny it is without topcoat!!! 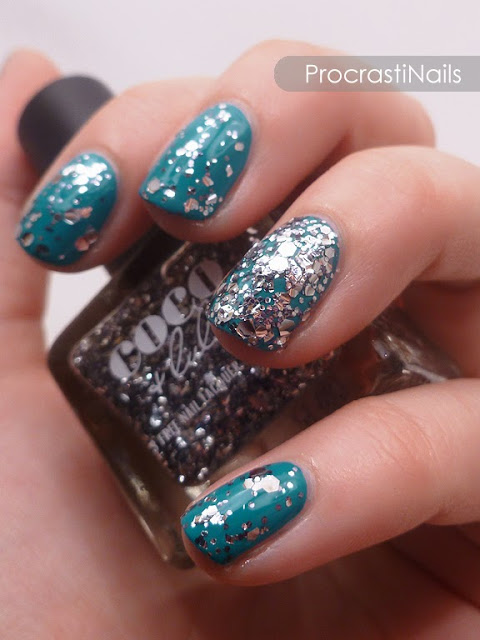 The second polish I got was called City of Lights and I don’t like it quite as much as I like Riviera. City of Lights is a topcoat with large, medium and small silver hex glitter scattered throughout. I did one coat on the majority of my nails, and four coats on my ring finger (in hopes of getting full coverage). The base holding the glitter was a bit thick, but I think a bit of thinner will fix that right up. I sealed everything you see here with a thick coat of Seche Vite to smooth it out.

The single coats of City of Lights went on wonderfully, the brush picked up a TON of glitter and what you see is literally a single sweep across the nail. The glittery accent nail I did was frustrating. Maybe I didn’t let it dry long enough between coats, but the polish got rather goopy on the nail after the second coat. I had to actually press the glitter down with my thumb occasionally because it would pile up in a goopy lump. It all smoothed with a topcoat, but it was still a bit annoying.

As you can see, the largest glitters in City of Lights were also prone to going a bit taco-y. It wasn’t enough to feel after a layer of topcoat to seal everything, but I still wanted to note it.

Overall I like this brand, and I’m hoping to try some of the other colours they’re carrying. Also I love the branding, and in my opinion you can never go wrong with square polish bottles! (They store so nicely in my bins, lol.)