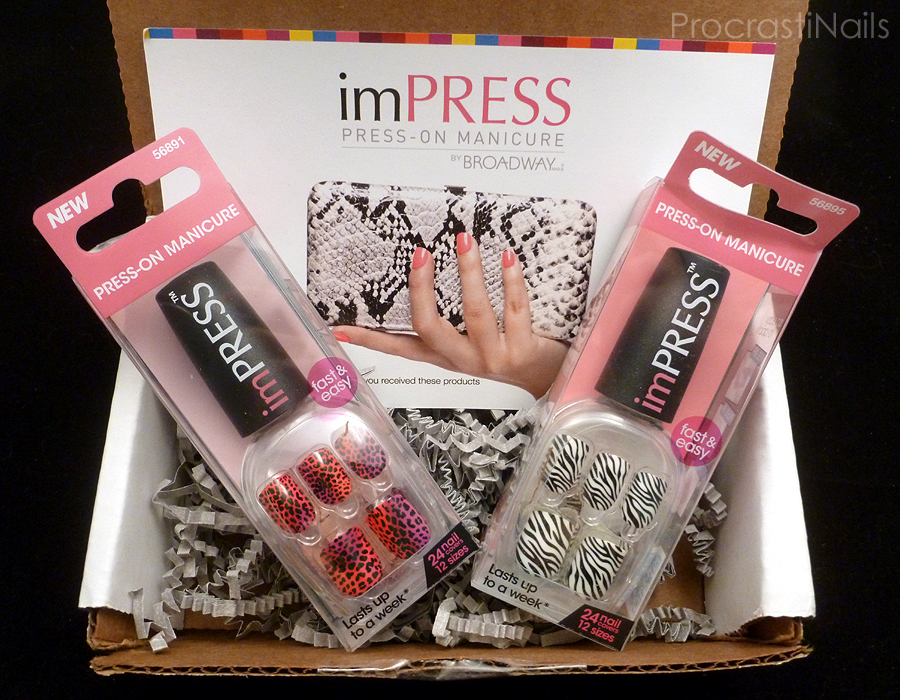 Nubbins can be awesome. There are certain colours and designs that look best on me with short nails (see: yellows and cartoon nails) and so sometimes I don’t mind rockin my nubs for a few weeks until they grow back out to my normal length. But this week when they broke it brought nothing but annoyance. I had so many designs in mind I was planning to try on my lovely nails! Cue sadness, but then cue (like a beacon of light) an email from Influenster saying I had been chosen to receive their Canadian VoxBox with imPRESS press-on nails! Ahhhhh! Perfect timing. 🙂 I tried them on and gave them a wear test for a day, so let’s see how they held up!

Broadway Nails imPRESS Press-On Manicure nails are a way to get a nail art look without the time or money it would cost to do it yourself or to go to a salon. I’ve seen these products in the store, but without any idea about how well they work or wear it didn’t seem worth it to me for the price tag ($10.99 for patterns and $8.99 for colours – depending where you buy them). I’m happy they decided to team up with Influenster in Canada because it gave me the opportunity to try this product I otherwise probably wouldn’t have picked up. They sent me two designs: Over the Moon (a neon pink/purple leopard print) and Dancing Queen (a black and white zebra print).

Here are the claims they make on their packaging: 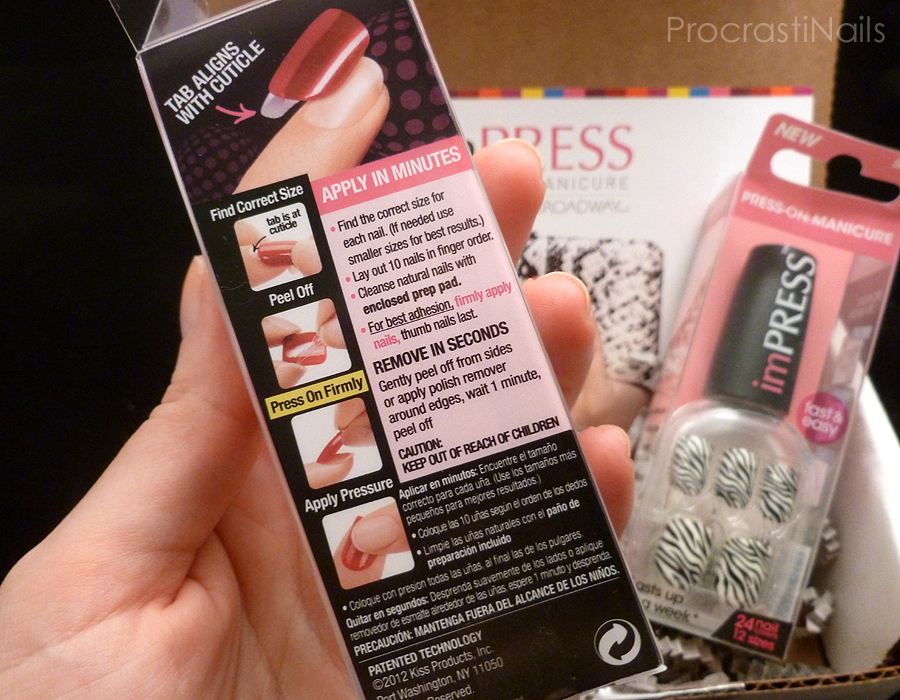 And the instructions are laid out very simply on the back of the box as followed: 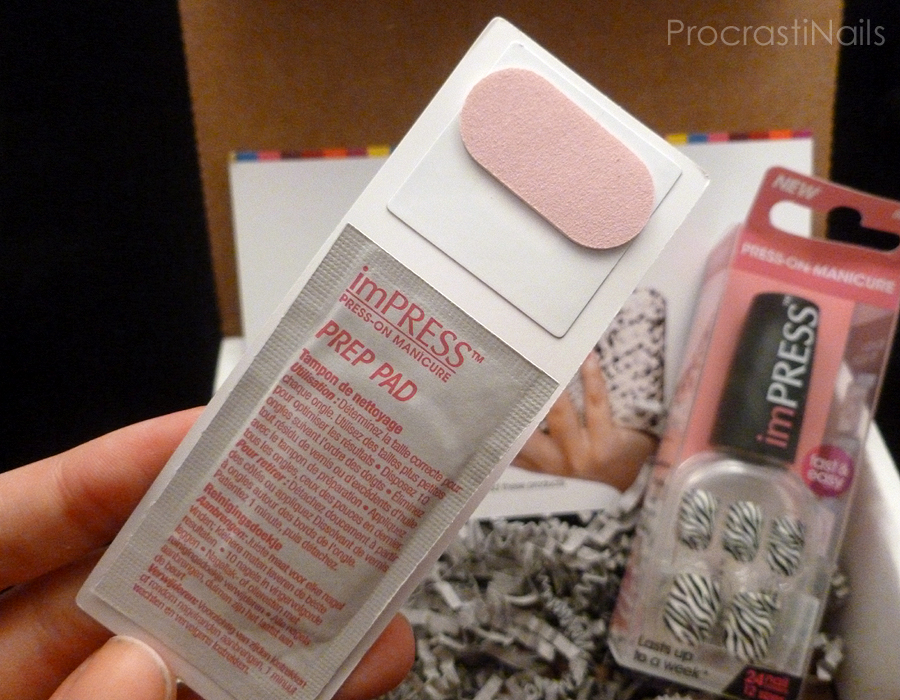 The package for Over the Moon came with the prep pad (from the smell it’s a pad saturated with alcohol to clean off the surface of your nail) as well as a small buffer, but Dancing Queen didn’t have this buffer. I wonder if that’s because one product is older than the other, or if the Over the Moon design is meant to be buffed down to a matte finish (which is a technique Broadway Nails suggests on their website).

I decided to follow the instructions to the letter and give the nails a try to see how long they lasted.

I decided to apply Dancing Queen because I knew I would be using them to test the wear (and so they’d likely get banged up). I like the design on Over the Moon better so if these work out I wanted to save those so I could actually wear them out one night. 🙂

These were really easy to apply, though after finding the ~right sizes for one hand I didn’t have enough of that same size to finish the other hand so my Cinderella hand is living up to it’s name and looks like it’s wearing clothes it’s grown out of a bit. Oh well.

When I first put these on my nails felt really…. Heavy. I remember
when I first started wearing nail polish my nails would feel heavy to
me, too. I guess it’s just that consciousness of having something
on top of your nails. Anyway, the feeling went down the longer I wore
them. After a couple of hours I barely noticed them at all!

I like the idea of how easy these were to put on and I love the array of designs that are available, but my one complaint would be that they don’t fit my nails quite well enough (as you can see in the above picture and on my thumb two pictures up). I have very curved nails so this isn’t a new problem for me when it comes to things going over my nails (hello magnetic polishes and nail wraps). But as you can see there’s quite a bit of uncovered nail on the side, and the nail itself lifts up quite a bit at the tip (even after firmly pressing for a few minutes as soon as I applied them). My natural nails also had to be filed as short as they could go. I hear there’s a medium length nail line as well, so those might be better suited for me.

I also wanted to do a brief wear test for these. Ideally I’d want to see if they’ll last the whole week, but I wasn’t ready to commit that much nail time to this. Here’s how that went…

After 20 hours I took these off, but I have no doubt they would last a few days in the right circumstances. I tried both removal methods, but honestly I’d suggest just peeling them off. It felt a bit uncomfortable but it was fairly quick. Also for those wondering no these aren’t reusable, when you peel them off you mangle them a bit and they still have the glue stuck on.

Would I buy these on my own again? Probably not, mainly since they didn’t fit my nail shape. Great idea though and I’d say for the length of time you could wear them they could be worth it if they fit you.

Phew! Long post! Let me know what you think, and if you have any plans to pick up some Broadway ImPRESS nails for yourself (or if you’ve tried them in the past). Thanks for visiting!! xx